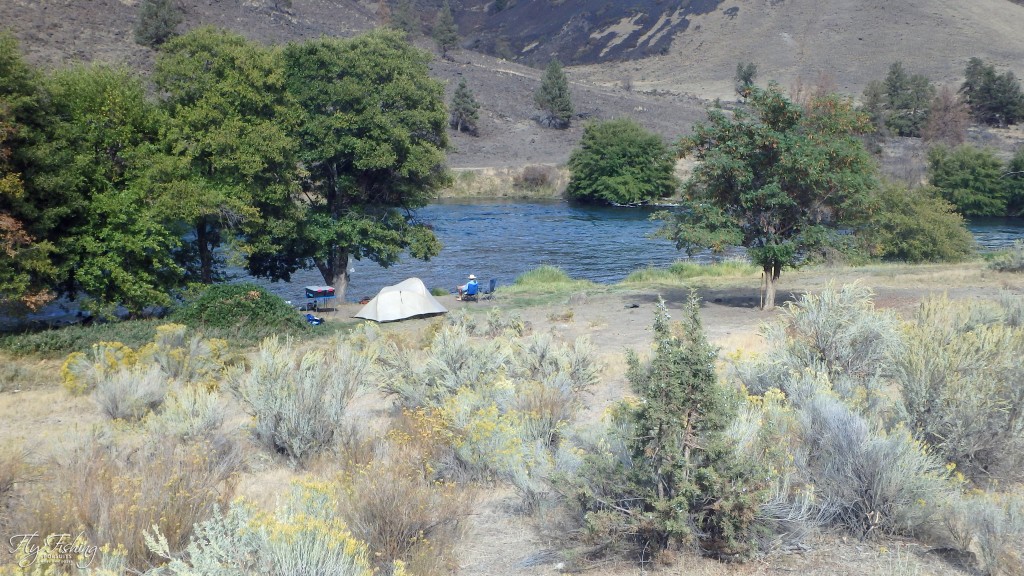 I love the fall in Central Oregon!  You can always count on an Indian Summer – warm days and there are always a few nights that are warm enough to camp.  Fishing usually picks up  from August as the water cools with the cooler temperatures. As we progress into the fall – all the brilliance of changing colors can be seen against some crystal clear blue skies. My favorites to fish are the Crooked River and the Deschutes River. The Crooked is smaller than the Deschutes – but unless it is a freaky day you can count on getting into some fish. The Deschutes is a challenging fishery – however when you do find a fish you have a chance at some nice sized rainbows and in a the 4000 plus CFS t give you a good play. You also have the chance at those elusive steelhead – they eluded me this  year. Well at least to the net – I hooked into a couple that took off like freight trains!  Still wondering what I could have done differently to keep them on!  The following are photos from a couple of trips that Dave and I took in October. Enjoy 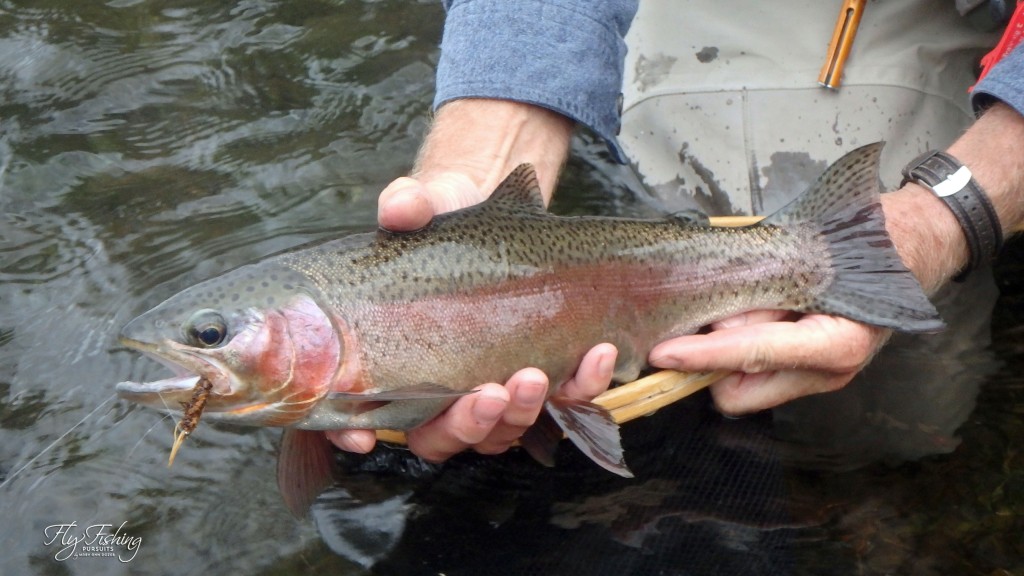 One of Dave’s red side rainbow trout 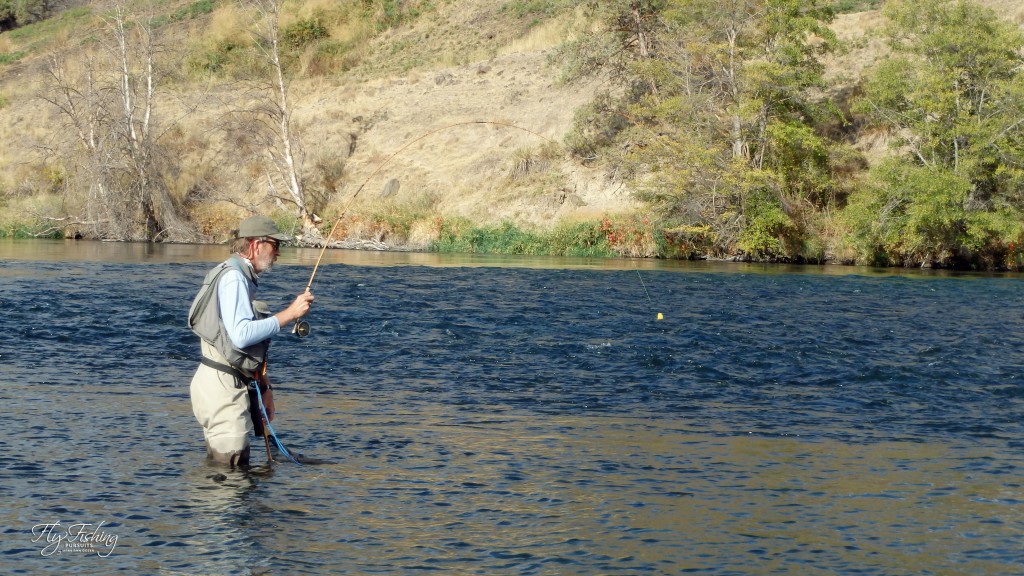 Yes – another day – another trout! Checkout the progressive bend in his bamboo fly rod 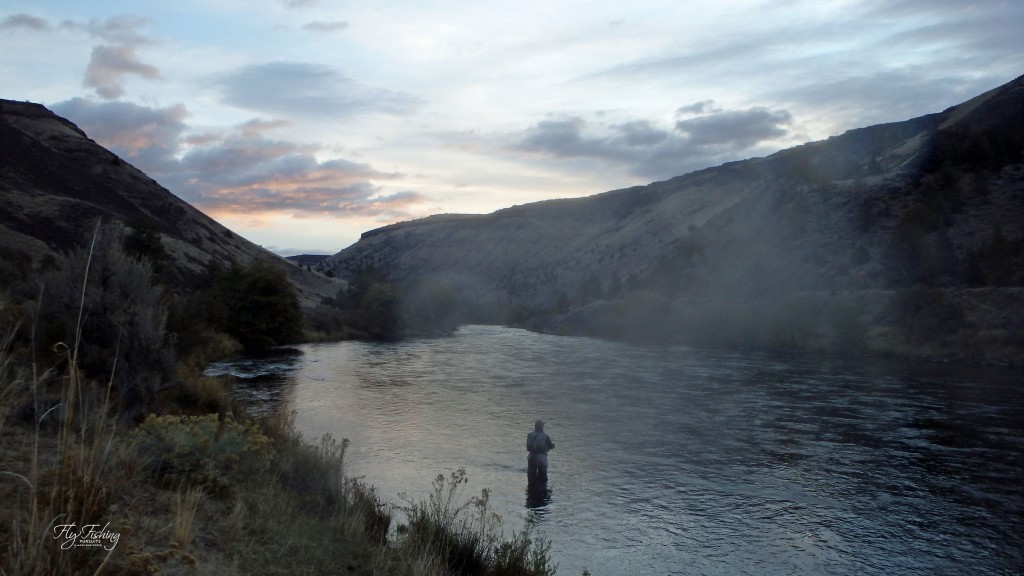 An early morning swinging for steelhead 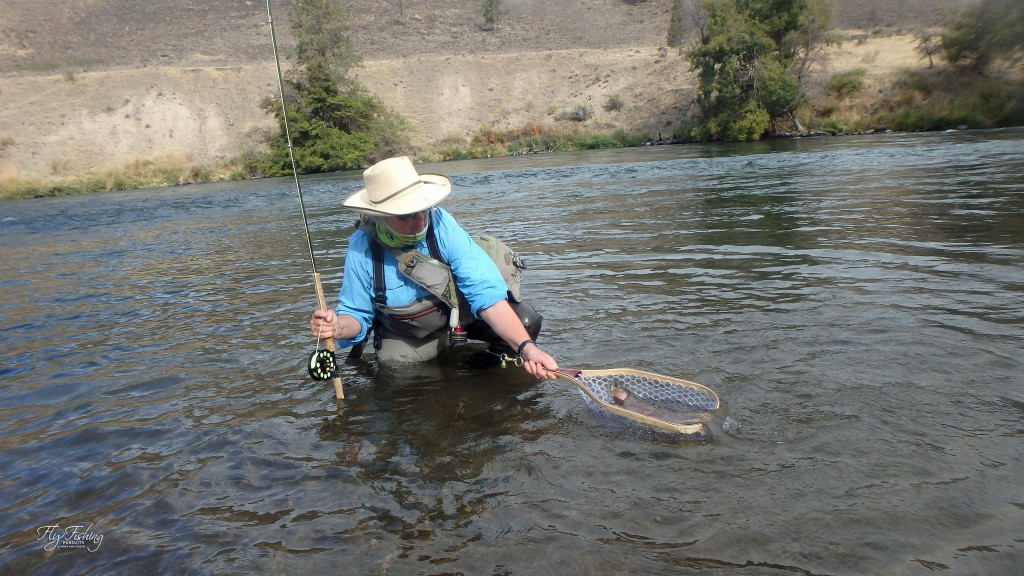 Yes – that’s me netting a nice red side rainbow trout 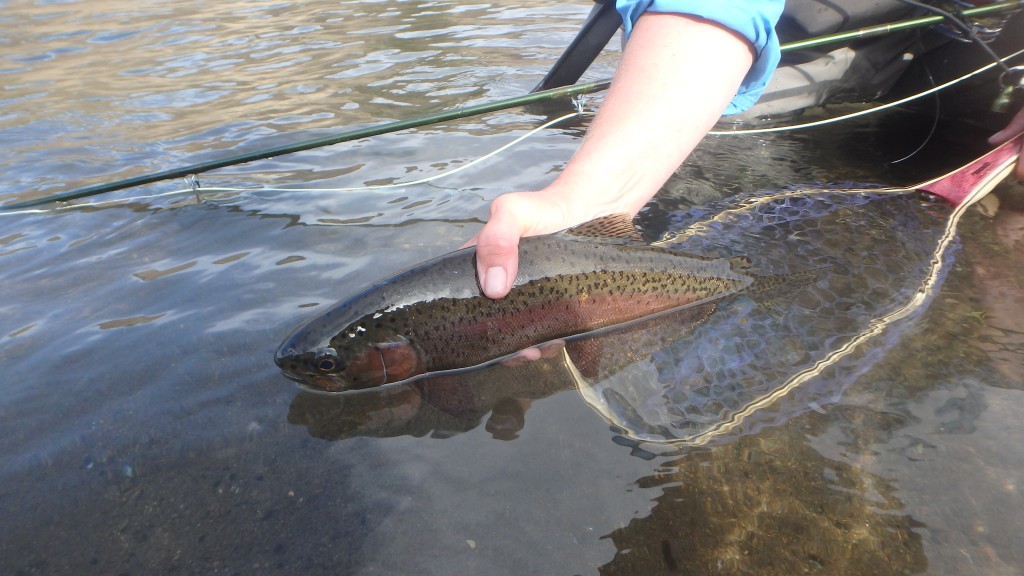 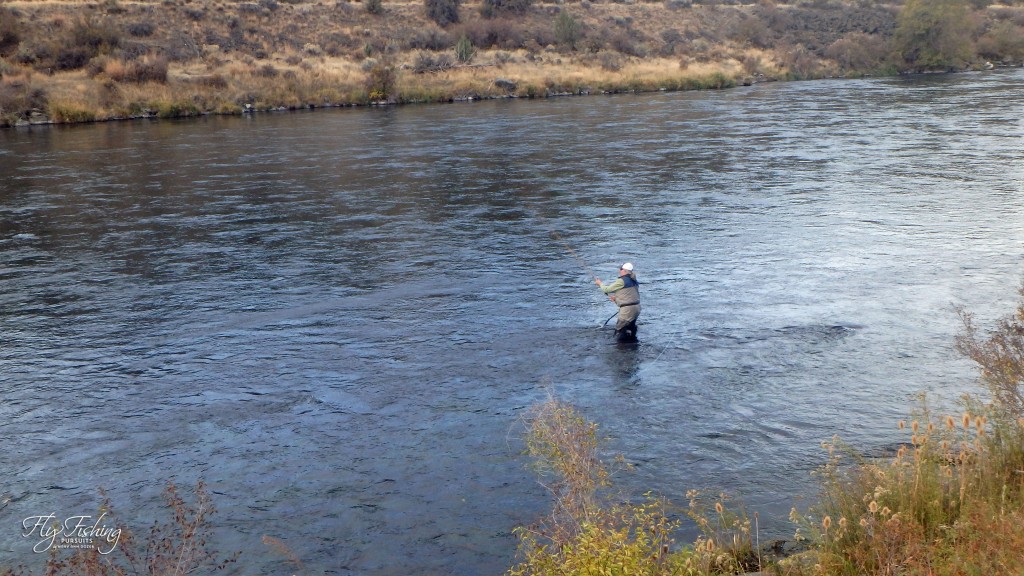 Swinging on my favorite run! 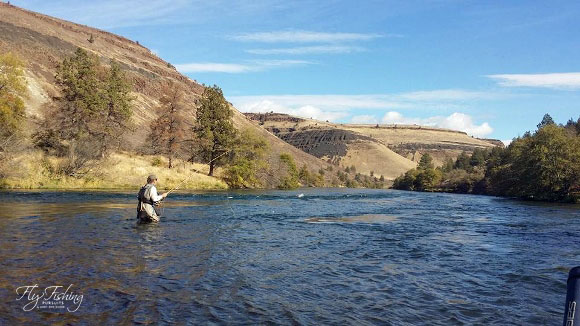 Another glorious fall day on the Deschutes. Warm and Sunny

Oh I live a great life! If I ever complain again shoot me!

Lou and I floated the Siletz River today, Dave was busy building bamboo rods! Thank you Lou! I so needed to get on the water, it has been way to long. Yes, 3 weeks not on the water is just too long.

Water level was about 5.5 and not a perfect Steelhead Green – a little brown tinge. TOMORROW SHOULD BE GREAT

Not a lot of action – but Lou and I landed a fish together on a egg pattern. I say both of us landed a fish as I left my net at home, not the smartest thing, but getting the wrinkles out for more winter steelhead fishing! Needless to say Lou hooked and played this steelhead and with a little Texas two step, I ended up landing it for him. So both of us were happy! 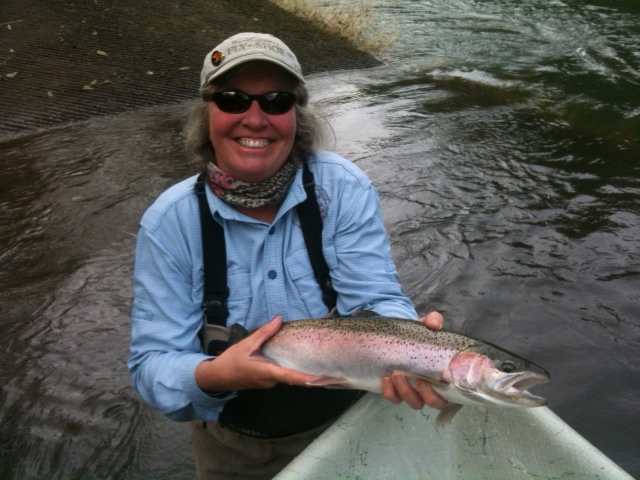 Great Colors on this Steelhead!

The month of October is my favorite fishing months and during that month I always find myself drawn to fish the Deschutes River. I guess it must because I can integrate some awesome fall scenery and warm/dry weather, floating a river, and camping. And if I camp on the Deschutes I can be the first on a few of the steelhead runs! Always a bonus – even it may just be more of an emotional bias than reality! 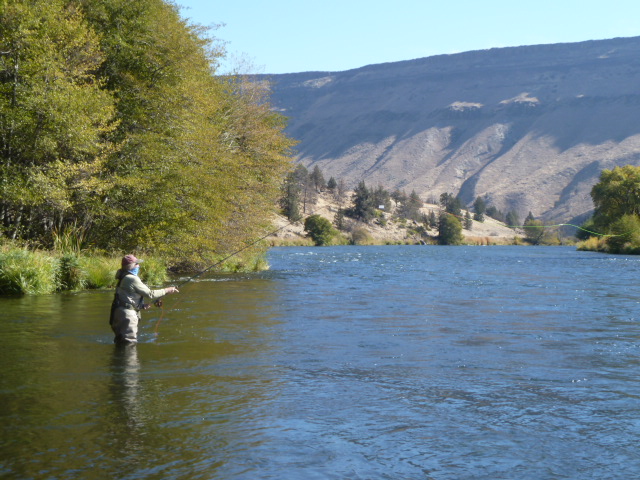 Swinging for steelhead on the Deschutes

This trip was my second trip in October, I suppose I can’t complain! My angling buddy was Sue. It is with Sue’s encouragement that I start integrating pictures of Smiley into my fly fishing ventures. It is a great idea and thanks for Sue for her ingenuity! Here’s a shot of Smiley with my hairwing box. I should say I was drying the box out – as I waded way above my waist and filled my fanny pack with water. 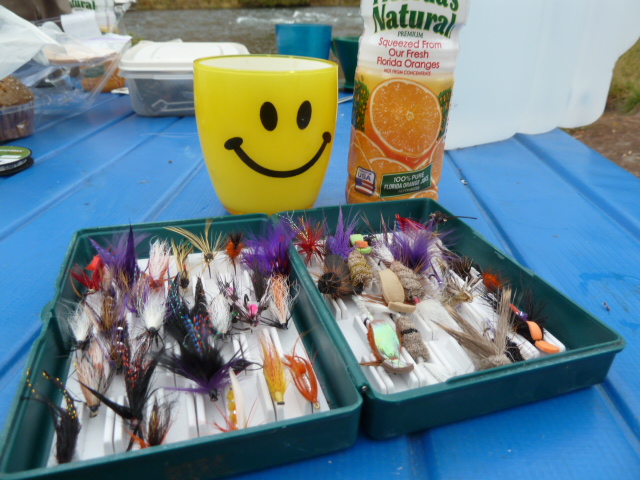 Now onto the fishing report!

Reports were fishing for steelhead was slow! Sue did a mixture of trout and steelhead fishing. She landed a good number of trout on pheasant tails and hares ear nymphs. I opted to continue my quest for steelhead. I swung my Sage VT2 7130 with a 510 Skagit Head and a T-17 sink tip. Last fall I had grabs with a blue and purple intruder – so I opted to stick with that color combo this year. Early morning of the second day – a fish jumped twice to the surface. Was it chasing my fly? Maybe! Maybe not! We moved down river and about noon I opted to change colors to an olive intruder. Voila! A solid connection and I landed a nice steelhead! I subsequently lost my fly on the rock; the steelhead must have been in front of. Out of olive intruders I went back to a black and blue style intruder. Guess what! I hooked into a larger fish behind the rock I had just lost my olive intruder on! Hmm! I should note Sue was fishing the same water with a Skagit (570 grains) Type 6 sinking head (6-7 ips) and had no interest. Moral of the story: Even if reports say fishing is slow I say go fishing– as you won’t catch a steelhead if you don’t go. Be willing to risk losing some flies and fish deep. 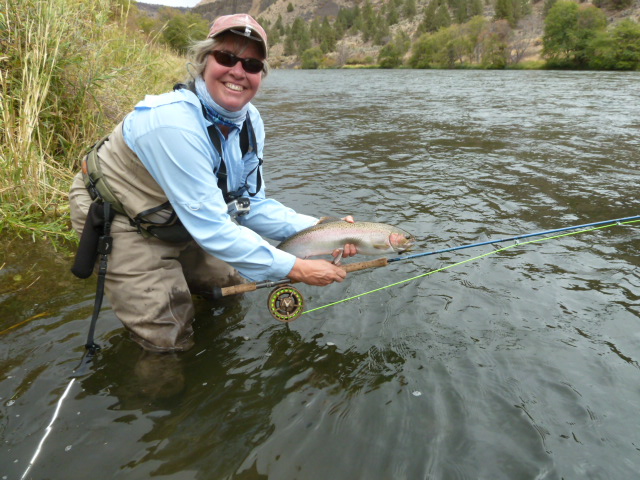 If you want to enjoy the catch – watch the following video!

Today I ventured to the Siletz – this time solo – as Dave was fishing with a buddy. You know one of those boys fly fishing trips where girls aren’t allowed. Oh well…I enjoy fishing by myself .. so I off I went back to the Siletz. Now I have to wonder, is there ever a day when it not a drizzling on the Siletz. As like yesterday – it was drizzling and then the occasional rain burst. None the less, the colors of the leaves were in full fall splendor. And with the little burst in water flow the fish were moving. The CFS was about 250 and the height at 2.5 today. I was swinging a blue-black Hobo Spey. And today was my day! Yes voila a steelhead within the first 15 minutes and two others on for a nano second in the next hour. No complaints here. Happy New Year to all,

Just a quick post to let you know we have a great set of fly fishing classes at Back Country Fly Shop that will take your fly fishing skills to the next level. Check out the following video.

Our January classes focus on building your steelheading skills. We have a special treat – John Larison, author of “The Complete Steelheader”, will be sharing his knowledge on Winter Steelheading with Skagit lines and sink tips.

On Saturday, Dave and I explored new steelheading water for us! We headed to Drift Creek – that flows into Alsea Bay. I have to say this is a nice piece of water that has lots of potential for steelheading. The challenge! Getting there isn’t for the faint of heart. However, if you are willing to do the “time” then you will be treated to a special steelheading spot. The hike is just about 3 miles and it all gradient! The altitude change is 1000 feet – there is a small flat section in the middle to catch your breath but the first and bottom 1/3 will definitely got our heart rates going. Well at least it did for Dave and I and we are both over that 50 mark!

I swung with my 9 1/2 foot Sage Rod and a Rio 310 Grain short Skagit. I left my switch rod at home concerned about the casting space. My shorter rod got me to most of the water – but I could have just as easily brought by Sage Switch rod with me. Dave dead drifted with his 10 foot Sage rod.

We were clearly early for the steelhead – but none the less we got on the water and discovered a new spot for 2012. 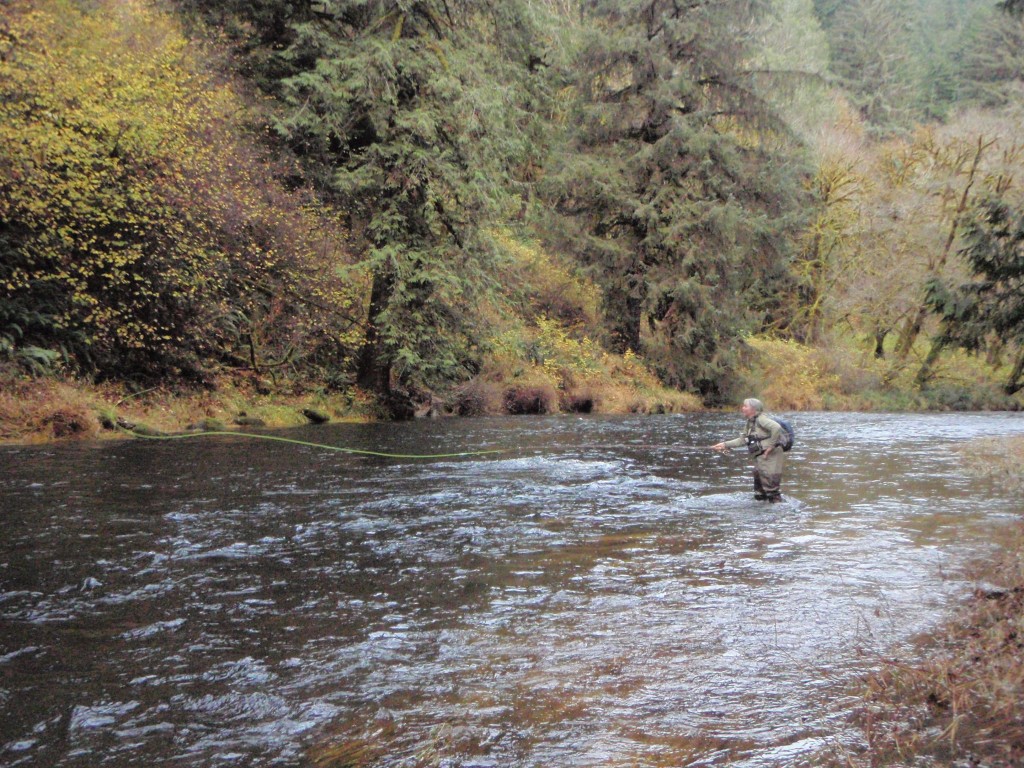 October – brings cooler days – but you can’t beat spending a few days on the Deschutes in the Fall chasing steelhead. And chasing it was – a slow two days on the water. We didn’t see any bent rods or hear about any landings. We did hear about a few tugs. However, Sue got more than a tug – when she hooked and landed a steelhead on our last run of the day. My goodness talk about waiting till the last minute. Congratulations Sue – it was great to see you land your steelhead. Sue was dead-drifting an egg pattern with her 9 1/2 foot 8 weight.